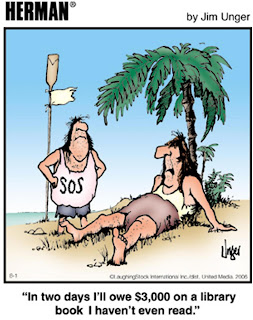 In this Herman cartoon by Jim Unger, there are two men on a desert island, they have been marooned for a long time. The man sitting under the lone palm tree is fretting, and says to the other man, "In two days I'll owe $3,000 on a library book I haven't even read!"
There's an old New Yorker cartoon where a woman and a man and their child are walking down the street. The woman is holding the hand of a child who has a saucepan (a cook pot) upside down on his head. Passerbys are staring back at the child, gawking. The woman has a scowl on her face as she says to her husband, and is obviously disgusted,"I know what they're thinking! They're thinking, 'What an old, banged up saucepan that is!'"
Both of these cartoons have a common theme--preoccupation with the wrong problem. Maybe your lifestyle isn't quite what you envision for yourself, so you chafe about that. Your so-called career never took off, and you stew. Or,you are "just a mom" and not using your college education--or never got an education--you're merely loving your children well. Or, you met and married the person who was to be the love of your life but the companionship is like, well, a bad prosthetic leg (good ones are great, I am told). Or you sleep on the floor on a mattress in a little room with people you hardly know because you're in another country--far from your home, far from the people you love. Or, you're in the military, and think about getting out, hoping for a better tomorrow--but wish that were TODAY. Or, maybe you had planned well but lost everything in the stock market, or in gambling, or perhaps your 401K is now a 201K.
Perhaps you live in a house which is either a fixer-upper but you're not a fixer-upper, so you feel helpless. Or you're are the owner of a house which can now be sold for half of what you bought it for 6 years ago.
Maybe you're going to lose your house--the house you raised your children in, and the house which holds such memories-good and bad. But it's the house you thought you'd live in for the rest of your life.
Maybe it's really bad--you just moved to a new city and don't know anyone, don't have a job, and are unsure of how long you can stay where you're staying tonight.
You're anxious about the future. You're a bit like the bird in this picture:

Many of these are justified concerns yet some of them are in the light of eternity, things that will pass. Our daily occupation is to work for a better tomorrow, to hold ourselves accountable to our Maker, but we're not to be preoccupied, to be worried all the time,  with the wrong things.
I will answer the unasked question which is begging for an answer: What should I be preoccupied with-or-what is justifiable preoccupation?

I think the answer we need to ask ourselves is always the same and is a variation of this: Am I drawing closer to God every day (today)? That, I think, was what Jesus was endeavoring to paint a picture of in Matthew 6 as well as many other places: Jesus says:
"Do not lay up for yourselves treasures on earth, where moth and rust destroy and where thieves break in and steal; but lay up for yourselves treasures in heaven, where neither moth nor rust destroys and where thieves do not break in and steal. For where your treasure is, there your heart will be also...
"No one can serve two masters; for either he will hate the one and love the other, or else he will be loyal to the one and despise the other. You cannot serve God and mammon.
"Therefore I say to you, do not worry about your life, what you will eat or what you will drink; nor about your body, what you will put on. Is not life more than food and the body more than clothing? Look at the birds of the air, for they neither sow nor reap nor gather into barns; yet your heavenly
Father feeds them. Are you not of more value than they? Which of you by worrying can add one cubit to his stature?
"So why do you worry about clothing? Consider the lilies of the field, how they grow: they neither toil nor spin; and yet I say to you that even Solomon in all his glory was not arrayed like one of these. Now if God so clothes the grass of the field, which today is, and tomorrow is thrown into the oven, will He not much more clothe you, O you of little faith? "Therefore do not worry, saying, 'What shall we eat?' or 'What shall we drink?' or 'What shall we wear?' For after all these things the Gentiles
seek. For your heavenly Father knows that you need all these things. But seek first the kingdom of God and His righteousness, and all these things shall be added to you. Therefore do not worry about tomorrow, for tomorrow will worry about its own things. Sufficient for the day is its own trouble."
Posted by PastRemains at 7:45 PM